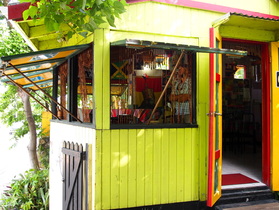 I have been to all the restaurants on this list unless noted otherwise.  Most of my friends are non-vegans so they always put me in charge of finding the restaurants because I'm the "difficult" one. That's how this list has come to be. If it were just me and my vegan buddies we would probably be at someone's house creaming cashews and drinking green juices together! :-)

Please feel free to get in touch and tell me about your favorite vegan friendly restaurants in the area!
This is a work in progress and always being updated, keep checking... click on the name of the restaurant to be transported to their site.

*Key*      "Vegan"=all vegan            "Vegetarian/Vegan"= only vegetarian & vegan             "Vegan Friendly"=a few/some vegan items
Annapolis
Lemon Grass (Thai vegan friendly): Good Thai food and they understand how to make their dishes vegan so you can request almost anything to be "veganized." It's a small trendy place with an outdoor patio.

Metropolitan (vegan friendly):  A "farm to table" restaurant in a trendy part of town. I like going here when I'm in Annapolis especially if the weather is nice because they have a roof top deck/lounge.  There aren't a ton of vegan selections on the menu but they have a few (I like their burger)and the chef understands what vegan is which is helpful.


Paladar (Latin, vegan friendly): Sort of a trendy bar atmosphere in a restaurant that feels a little like a chain- maybe that's because it is! And it's among other chain restaurants and shops in the Annapolis Town Center (where the Whole Foods is- don't you love my land mark?)  Anyhow, if you are a vegan there are a least a few things you can eat here and your non-vegan friends will probably like it too!


Vin 909 (vegan friendly): Apparently this is the place to be in Annapolis.  I've been here a number of times and on a recent trip there was a line down the sidewalk waiting for the place to open.  You can probably deduce from the name that it's a wine place.  It's also a "farm to table" restaurant.  They don't actually have anything vegan on their regular menu; however, they are happy to accommodate us vegans, the chefs are perfectly proficient in how to make a vegan dish. The restaurant is known for it's pizza and they will happily create a vegan one- that's what I get!

49 West (vegan friendly): This is a bit of stretch for the list but if you're meeting someone for lunch this place has a nice cafe atmosphere and they have a couple dips, salads, and two vegan sandwich options.


Baltimore
Fells Pt﻿.
Liquid Earth (vegetarian/vegan): This place is legit, seriously.  They make fresh juice, smoothies, and have a full menu of amazing food including a raw menu. All prepared by one guy in a space so small it's shocking.  Definitely go to this spot, it's not fancy or the fastest, and it's only open til 7pm.

Sticky Rice (vegan friendly): Sort of a Thai/Sushi fusion spot right next door to Liquid Earth- it has a bar/restaurant vibe that is popular in Fells Pt.  I've only been here once b/c Liquid Earth wasn't open and I didn't know where else to go.  Their menu is marked with vegan selections.  I wouldn't call it healthy vegan but it was pretty tasty.

Harbor East
Lebanese Taverna (vegan friendly): The vegan menu items aren't marked "vegan" (although it is marked for gluten free) but they have more than a few vegan choices- like falafel which is really good!

Midtown/Charles Village
Land of Kush (vegan): The food at this place reminds me of the Ital Rasta eateries I've been to in the islands.  They have a small fixed menu and some daily additions.  The portions are large and it's very reasonably priced.  Many of their choices have some type of meat substitute involved and since I'm not a big fan of unnatural meat substitutes I'm not thrilled with a lot of the selections.  Overall the stuff I had was pretty tasty but make no mistake; I wouldn't call it healthy! It's an order at the counter and eat in or take out place. Still, I'm grateful for their commitment to veganism and to the community and they seem to have a wide range of clientele supporting them.

Meet 27/Sweet 27 (vegan friendly): Only a few vegan items marked on the menu but they are all good. It's fairly inexpensive, good atmosphere, and BYOB.  If you want dessert you can go next door to Sweet 27; they have vegan cupcakes but I've had 3 different cupcakes there and frankly they are the worst vegan cupcakes I've ever had- but I guess sometimes you just need a cupcake.

Soups On (vegan friendly):  This place has a cool vibe- I like it.  The owner is always behind the counter taking orders and is speedy and friendly- it's an order at the counter and sit down or take out kinda place.  They serve soup, salad, and sandwiches and everything is $5 and a lot of food- amazing!  On your way out go to "OK Natural"- the small food market next door/below.  It's really great.

Two Boots: (Pizza vegan friendly): This place is a fairly recent addition to Baltimore. I only knew the Two Boots in NYC which I like a lot and was psyched when I saw them in Bmore. They have two different kinds of vegan pizza, one square thick crust loaded with veggies (called Earth Mother, my favorite) that you can get with or w/o vegan cheese, and another one that's veggie thin crust with vegan cheese.

﻿N. Baltimore/Hampden﻿
One World Cafe (vegan/vegetarian): I don't get here often because it's not convenient for me but I wish it was.  Super chill atmosphere and a few outdoor tables (I love eating outside.) They have a great vegan selection and amazing vegan desserts- yum!


Golden West (vegan friendly): Cool place to go with eclectic atmosphere. They even have vegan breakfast which is unusual which is not an option at most other places on this list and it's served all day! They have a good selection of vegan stuff all around including desserts.  Overall I'll say it's not my top choice for food but it's a good and fun place to go.


Catonsville
Indian Delight (Indian, vegan friendly): Very good Indian food and friendly, helpful service.  And, it's BYOB with no fee for corking!  They even have dosas (typically only found at South Indian restaurants) which I'm practically obsessed with.


Clarksville/Columbia
Great Sage (vegan): This isn't your average vegan cafe!  This place is a New York vegan sort of place and the only place I know of around that is all vegan. If you're a vegan, dating/married to a veg﻿an, or want to be this is where you go to eat.  They have organic wines, beers, and a fancy cocktail list -if you're into these types of things.  Overall it's not cheap but it's awesome to have a nice all vegan restaurant- and it's in Clarksville, who knew!  Also, next door is Roots Market (same owners) which is my favorite place to buy groceries.

Mango Grove (Indian vegetarian/vegan): This is an Indian restaurant with South Indian cuisine- like dosa, uttapam (so good:)) They totally understand vegan and the menu is marked, even on the lunch buffet.


Pikesville
Al Pacino Cafe (Egypto/American/Mediterranean vegan friendly):  I can only speak for the vegan pizza which is really very good- probably the best vegan pizza I've had at a restaurant. They also have falafel and other Mediterranean vegan options.  Not the greatest eat-in atmosphere but it works if you're ok with a simple place.