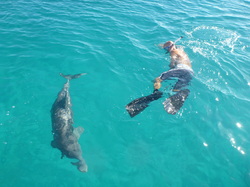 Who is this Marty guy anyway?  Marty is my husband and he really likes to eat and he loves animals.   Fortunately for me he is one supportive dude.  Just a short while ago, 2008,  both of us were eating meat and not thinking twice about it.  I made one diet change at a time and now I'm here a vegan and this guy has followed on his own, in his own time and emerged an advocate of an animal free diet.  He still makes attempts at catching fish and lobster and eats them; for him that's part of the lifestyle we live on the water.

Maybe you should know a thing or two about Marty before you can understand his "favorite picks." Some may think it challenging for Marty to eat vegan because he is not a fan of beans.  He will eat beans when I make them but I think he is a little scared- we're making progress (oddly if I shape the beans into a burger it seems to work!)  Marty is also timid in the mushroom department.  So basically nothing that is heavy on beans or mushrooms is going to be on his list.  Also, desserts aren't counted in his favorites- otherwise the list might be all desserts :)

Also, you'll notice at the bottom of all my recipes there is a designation for how many "Marty's" it feeds.  This is because I feel that it's hard to really know how many people a recipe serves even when it says...who are these "people" anyway.  Marty eats a good amount so you can be sure when I say it feeds "4 Marty's" it makes enough food for 4 good eaters.